My kids adore Disney Jr. and eagerly await their favorite holiday programs each year. In fact, they’re watching a Minnie Mouse special as we speak. 🙂

There are so many great shows that it can be hard to keep track of them all. In turn, here’s a round-up of Disney Junior’s holiday episodes and movies in the upcoming weeks, so you don’t miss any of the fun!

Mickey Mouse Clubhouse – “Minnie’s Winter Bow Show” – New One-Hour Episode – 9:30 a.m.
When Minnie and her nieces accidentally take off in a hot-air balloon, they are sent on a whirlwind journey to the Clubhouse North Pole.

Sofia the First – “Winter’s Gift” – New Episode – 10:30 a.m.
Alyson Hannigan, Phylicia Rashad and Nick Offerman guest star in a holiday-themed episode where Sofia meets a young faun (Hannigan) who has been cursed by an Ice Witch (Rashad). Disney Princess Tiana (voiced by Disney Legend Anika Noni Rose) from The Princess and the Frog will make a special appearance to help Sofia and her new friend learn that a true gift comes from the heart.

Lalaloopsy – “Holly’s Jolly Holiday” – New Episode – 11 a.m.
On the only day it snows in Lalaloopsy Land, Jolly Holiday, Holly Sleighbells plans to deliver gifts to everyone by sleigh but a lack of snow forces her to rely on the help of her friends.

Tickety Toc – “Christmas Present Time” – 5 p.m.
It’s Christmas time in Tickety Town and Tommy and Tallulah are determined to make every merry second count. The twins find a new way to make snow, build a giant igloo and roll the biggest snowball ever.

Jake and the Never Land Pirates – “Grandpa Bones/The Arctic Pearl” – New Episode – 10:30 a.m.
Bones’
grandfather arrives to lead Jake and his crew on a hunt for the treasure of legendary pirate, Cap’n Buzzard. Then, Jake and his crew help their penguin pal Percy find his best friend Pearl. 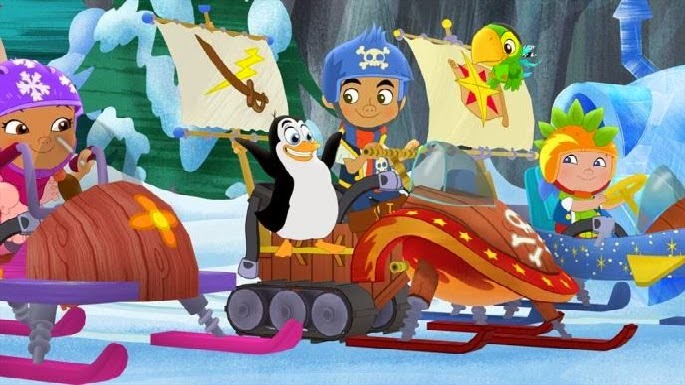 Snow Buddies (movie) – 6:30 p.m.
This time around, the cute and cuddly puppies from Air Buddies find themselves in the icy terrain of Alaska, where they’ll meet some new friends, compete in a sled race and try to find their way home.

Jake and the Never Land Pirates – “F-f-frozen Never Land” – 5 p.m.
A blizzard hits Never Land and Skully catches the flu, so Jake, Izzy and Cubby, along with penguin pal Percy, must brave the arctic weather to search for the legendary Fire Red Rubies to cure Skully.

Santa Buddies (movie) – 6:30 p.m.
D-Dawg, Buddha, Budderball, Rosebud and Mudbud are back, and this time they’re on a mission to save Christmas.

When it’s chilly outside, Disney Junior can warm up the entire family with enchanting feature films weekdays at 12 p.m. and 5 p.m. Popular movie titles include The Pirate Fairy, Secret of the Wings, Lucky Duck and many more. As an added bonus, between each movie the network will air marathons from fan-favourite series including Sofia the First, Jake and the Never Land Pirates, Sheriff Callie’s Wild West and Mickey Mouse Clubhouse.

These winter stories are the perfect excuse to snuggle in with my kids this winter. Add some hot chocolate, and you’re good to go! Happy viewing and Happy Holidays!

I'm Lisa - a business owner, wife & Mom of two. I no longer contribute to this blog, but hope you enjoy the many articles I have written about my parenting adventures, products I can't live without, my love of The Happy Planner, and how to save a few bucks. It was a fun 10-year ride! 🙂

For the past 12 years, I have worked in the social media and digital space. My passion is working with fellow female business owners to solve their biggest digital challenges and help them thrive online. Interested in working with me? Click here